His latest is Ultimate Barn Finds.We interviewed Mr. Wyss about the scope of the book.

WYSS:It’s the hottest topic in the car world. You know all those years I spent shooting pictures of pristine restored cars, the real story was how the cars were tracked down and bought. So now I’m hot on the trail. I have written books about specific model cars before, like the Cobra, or the Corvette, but even while doing all those other books, the most interesting part to me was always in finding out what happened to the great cars and how many were “lost in the sands of time” only to be re-discovered by a diligent barn-finder.

NEVADA MUSCLECARS: Out of all fifty cars in the book, which is the best example?

WYSS: It has to be the cars got for free. Zero. Nada. Say, for instance, the $2 million Italian-bodied Corvette prototype that was simply given free to the first person that asked? Or the case of the Hollywood stunt man and custom car builder who was walking through a building at Ford Motor Company with A.J. Foyt and A.J. nudged him and said “Tell ‘em you want one of those race cars—that you’ll put it in the movies—and they’ll give it to you for free.” The stuntman—Dean Jeffries–chose a Ford GT40 roadster, one of four made, and today it’s worth $4 million.

NEVADA MUSCLECARS: We know your book covers many brands of cars. What is the European content?

WYSS: Over half the book. There’s two Bugatti Royales, one found in a junkyard, the other bricked up at the Bugatti factory to hide it from the Nazis. There’s five Ferraris, including one found on eBay where the seller thought all he had to sell was a Devin-bodied kit car, and then there’s a Ferrari 400 Superamerica that I thought about buying that was rebodied by Pininfarina three times. There’s two Lamborghinis, and a Lancia. There’s also a Maserati 151 race car that raced at LeMans and is vintage racing today.

NEVADA MUSCLECARS: Will we find you on the hunt for cars yourself?

WYSS: No, when the internet came along I found it much more difficult to keep claim jumpers from getting the cars I had found. I’m now into other hobbies, such as learning throughbred horse breeding —I actually sold my first horse in 2011! And I am writing a mystery novel set in the world of Ferraris so, in the Barn Find series, all my barn finding experiences are in the past.

NEVADA MUSCLECARS: And am I to understand that you have even included some cars where you lost out financially?

WYSS: Yes, I ruminated for some time about including those cars, thinking–if I do include some of my car buying mistakes–will that lead to some critic saying ”Well, why should we listen to a guy who is dumb enough to sell a gullwing Mercedes for $2500?” But I finally concluded I would include a few of my own stories because they are proof that I’ve been out there in the trenches myself. Readers can learn from my mistakes.

NEVADA MUSCLECARS : I know that you have a strong “lessons learned” component to the book. Can you explain that more?

WYSS: Well, the book is divided into 50 chapters , each about an individual car. But at the end of each chapter I have a one paragraph summary of the lesson that is there to be learned from that particular barn-finder’s success. For instance, in one case, a guy from Detroit saw a great car at a horse racetrack in New York and spread the word among his New York friends that he wants to know who owns it. Finally someone tipped him off that it was seen in a junkyard in the Bronx and he was able to buy it for $400. Today that Bugatti Royale is now among the world’s most valuable cars, arguably worth about $25-40 million.

NEVADA MUSCLECARS: But we can’t go back in time and get these great deals?

Aren’t you afraid a critic will say“What’s the use of looking–all the good ones have been found?”

WYSS: No, you can’t actually say that because automakers are continually making new prototypes and show cars and race teams are making new race cars. Each year, both automakers and race teams shove the last year’s specials to the back of the warehouse until finally some leak out to the public. Say, for instance, the Pontiac Solstice SEMA show roadster. It was a show car but probably still street legal.

Pontiac went down but did they crush all the concept cars? I don’t think so. They always say automakers don’t sell prototypes but I’m here to tell you that yes they do and there’s several examples in the book. In the new follow-up book, for instance, I am going to include the Maserati Boomerang, an excellent example of a prototype never intended to be on the road but which eventually was through the passion of the barn finders.

NEVADA MUSCLECARS: Well, isn’t it hard to get the original barn finders to tell you what they paid for a car? I mean, maybe they sold it for cash, so don’t want to wake up Uncle Sam?

WYSS: That’s true and I don’t always have that buying price though I can give readers a general idea. I bought and sold a few collector cars myself, from Rolls Royces to Ferraris, and sometimes “flipped them,’ i.e. sold them without bothering to re-register them under my name. But the emphasis in this series is more on the hunt; how the scent was picked up and the subsequent tracking of a great car through thick and thin by a persistent barn-finder.

NEVADA MUSCLECARS: What can we look forward to in the next book?

WYSS: The next book is alrady out–The Baroness and the Mercedes and

49 Other STories but I’ll talk about that another time. In that is the story of the time I bought a Ghibli where I went to a hospital operating room to track down the doctor that owned it right when he was doing an operation. Or the story of the Mercedes gullwings I bought and sold at a ridiculously low price because I had no place to store them.

NEVADA MUSCLECARS: So how can readers suggest a car?

They write me care of the publisher (Enthusiast Books, 1830-A Hanley Road, Hudson, WI 54016) I will consider the car their nomination a future candidate. It doesn’t have to be a car they owned, just a great barn finding story.

NEVADA MUSCLECARS: What about the end of the book? How do you sum it up?

WYSS: The book ends with a general chapter which has general rules with examples for those on the hunt. Plus there’s a few caveats in there , such as don’t buy a car with a salvage title, etc.

NEVADA MUSCLECARS: So where do you go from here?

WYSS: I had so many cars left over from the first book that I already finished the seocnd book and am now into what I envision will be a whole series. I think this is a fascinating subject area. Of course there are other writers working in this patch, like Tom Cotter (The Cobra in the Barn) and Jerry Heasley (Rare Finds) but my approach is a little different from theirs in that I am a historian and go more into a car’s historical significance and then I am also distilling the barn finder’s method in each example to see if there’s anything a reader also on the hunt could profit from. I also firmly drew a line at what cars I will include, based upon a car’s eventual worth. I tried to pick examples that will be worth, say, $100,000 and up when restored. I realized early on that, if I didn’t do that, I’d have to include every ’65 Mustang notchback that’s been unearthed recently and have a 1000-page book as a result.I also like some inkling of what the first barn finder who found it paid for it.

NEVADA MUSCLECARS: And you have some of your own artwork in the book?

WYSS: Yes, some of my photography, shot over the last 50 years, plus some of my more recent paintings. I didn’t become an artist until 2007 but that comes in handy when I can’t find a photo of a car–I can always paint my own artist’s conception of it. Here’s my GT40 painting of the one that won LeMans twice, owned by Rob Walton.

NEVADA MUSCLECARS : Where can we find the book and what’s the price?

NEVADA MUSCLECARS: Thank you for the interview and joining us for your great topic! 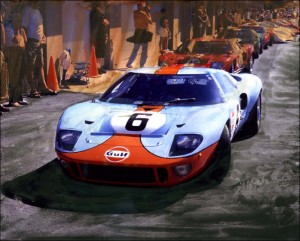