In 1967 and 1968, the SCCA held Trans Am races in support events with the FIA Endurance Races at both Daytona and Sebring in effect combining both series together for these 2 Internationally recognized large events. The opening race of 1968 was the Daytona 12 Hours, no Rolex sponsorship at that time, and was held on February 3-4,  fifty years ago. This was after 2 pretty successful years of Trams Am racing and the SCCA was starting to see some additional factory support come into the series. Ford Mustangs and Chevy Camaro still dominated the Over 2 class and Porsche stepped up big time in the U2 class over the Alfas. Later in March of ’68 at Sebring, American Motors would bring out their Javelin to compete.

For qualifying at the 1968 Daytona race, the Penske Camaro of Mark Donohue and Craig Fisher, now showing SUNOCO sponsorship, did have quickest time in O2/Trans Am class with the Shelby Mustang of Jerry Titus and Ronnie Bucknum a tick behind. 24 hours was a very long time for these production based cars to run all out on the banked oval and infield course. At the end, the red #1 Mustang of Titus/Bucknum won the Trans Am class and finished and amazing fourth overall behind the factory Porsche 907 Long Tails that lined up 1,2,3 at finish line.

At this first race in 1968, the Shelby Team was running their “tried and true” 289 CI engines prepared in house in California, that rarely failed over the 2 prior seasons. After this opening Win, the Ford Racing management wanted to use the new, and race untested, 302 Tunnel-Port engine for the rest of the season. The factory would ship the crated engines to Shelby in install directly in the two Team Mustangs. After that decision, at almost every race of the rest of the 1968 season, Mustangs would suffer engine failures of some type during this test. Even though the Tunnel-Port was fast with a bit more upper end horsepower, most race weekends, were a 6 engine weekend, with both cars blowing motors in practice, qualifying and races. It was very frustrating for all of the Shelby Team, which had previously had minimal engine problems with the trusty 289, even winning the GT class at 24 hr of Le Mans in the Cobra Coupe with a 289, in 1965 Championship International year. But they were taking orders from the top where the dollars were flowing to the team at Ford. Jerry Titus became so frustrated that he left and went out and brought Pontiac in with a Canadian businessman late in season and Chevrolet won the Championship in Trans Am for 1968 with the Camaro.

I am wondering if at this upcoming 24 Hour of Daytona Race in a couple of weeks, if FORD will have any type of recognition for their Win with Mustang 50 years ago, like they have on other such occasions. They do have the GTLM GT cars and some new “Stangs in the lower GS class now that compete solidly.

Anyway, we will see.

The winning Mustang of Titus/Bucknum through the infield portion of Daytona.

Recently restored 1968 Trans Am Mustang in Daytona/Sebring colors of red and black. Later in season Shelby would run cars again in yellow for awhile, to try and change their engine luck and then at end of season to Ford corporate blue to try some different “mojo”. 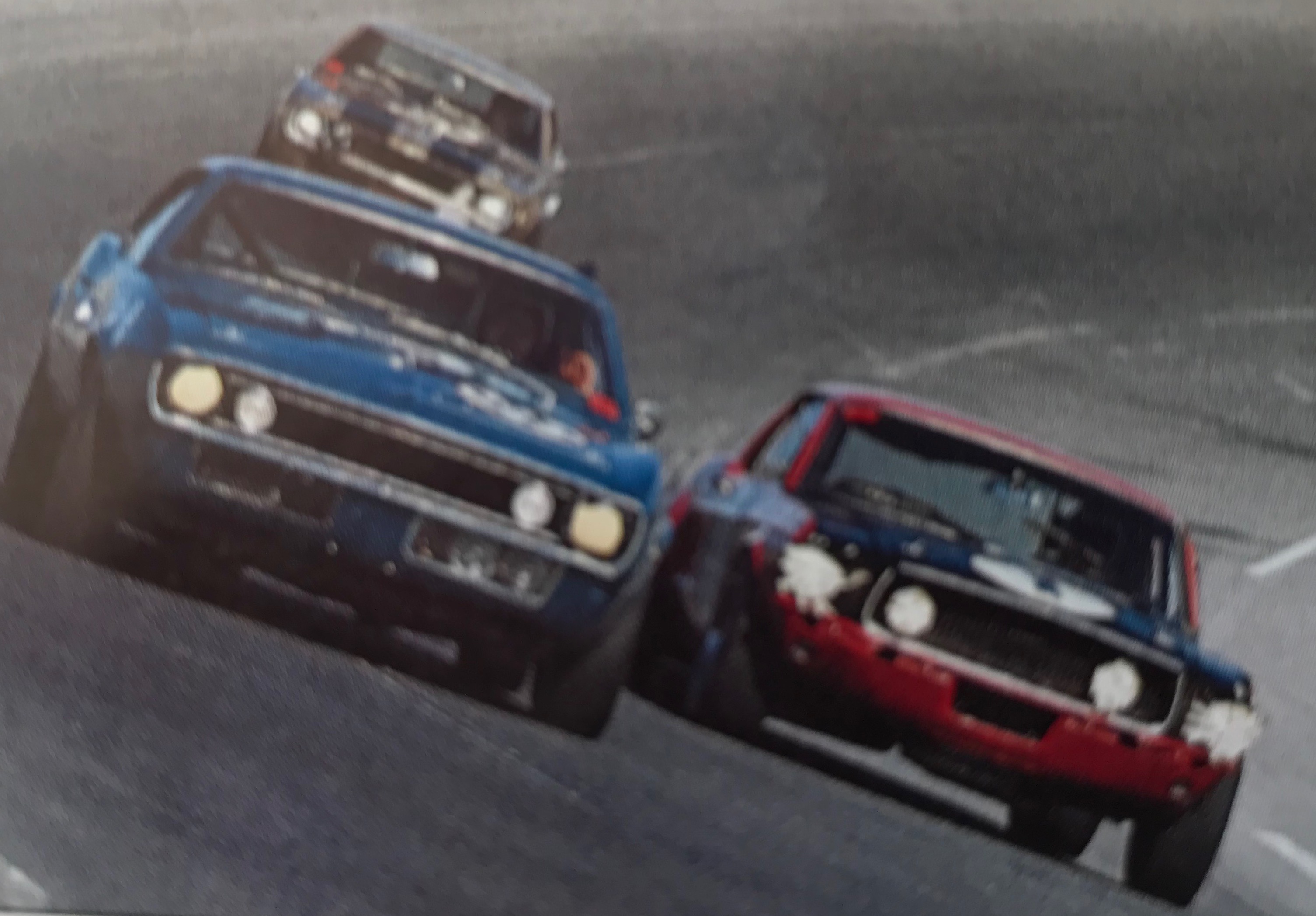 Camaro of Mark Donohue and Mustang of Jerry Titus on the banking in the opening laps of the 24 hr endurance race. 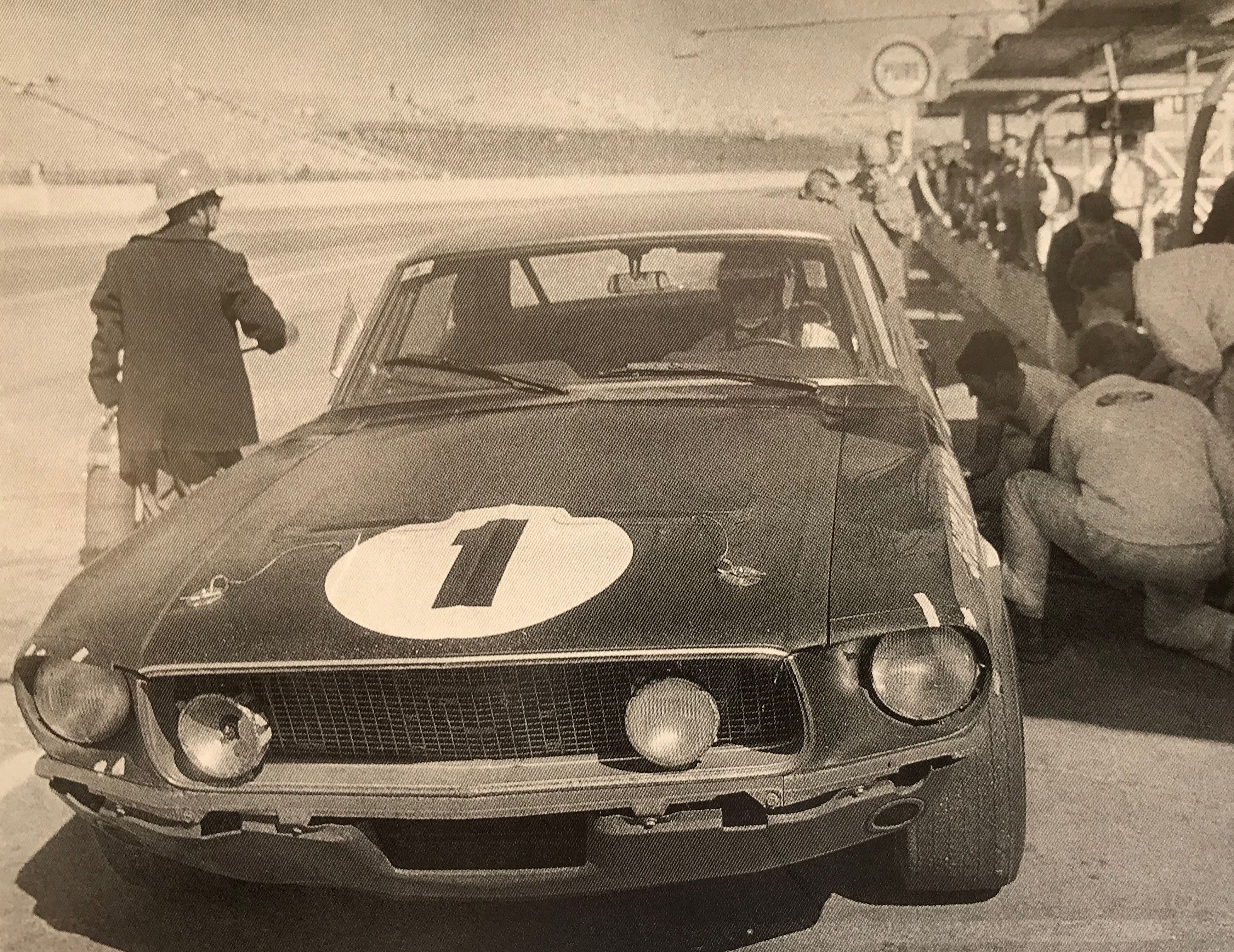 Jerry’s #1 Mustang during one of the many pit stops for the Daytona 24. This is probably late in race after sun up as you can see the beat up lights and the tape had been taken off by then.

This is classic photo. Porsche management wanted a “line up” photo as the 907’s crossed the line, but Mr Titus pulled up into the picture. The Porsche guys got all pissed off and had one of the Porsches drop back to push Jerry and his Ford out of picture. Jerry with his “pesky” nature would have none of it, and crossing the finish line  “flipped off” the photographers and Porsche guys as all the Shelby Team were laughing their asses off.

The second Team Shelby Ford Racing Mustang #2 driven by Horst Kwech and Allan Moffat finished further down at 17th place. This team Mustang would be run throughout the rest of the season by many other drivers including Parnelli Jones, Dan Gurney and Peter Revson at last race of season at Kent Washington.

Mustangs of Parnelli Jones #2 and Jerry Titus #1 at Lime Rock after color change back to yellow which the color that Terlingua Race Team won the prior year championship in ’67.

Dan Gurney in #2 at Watkins Glen later in year now in Ford Blue for the last few races. Titus actually won the Watkins Glen race for Shelby/Ford as his last win for the team in his #1 blue car.

After switching to Pontiac at end of season, Jerry Titus in a yellow and black Firebird, now that Ford had stayed in Ford Blue. This is last race of ’68 season at Kent Washington. In the next years Pontiac would use the Trans Am name for their upper end Firebird and pay royalties to SCCA. 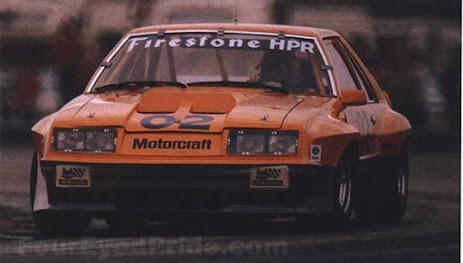 It would be 13 years later in 1981 when Ford would run another Mustang at the 24 Hours of Daytona in conjunction with Team McLaren in the M-81 in McLaren Orange. Tom Klausler and John Morton would finish 21st overall in the 4 cyl Mustang and were the highest placed finish for any American car that year when Ford/Motorcraft stepped back into big time racing. Firestone with their then new HPR (High Performance Radial) was a major sponsor for this combined team win in Prototype. Ironically, Team McLaren driver, and two time World Champ Fernando Alonso ,is running his first 24 Daytona this year, however not in the traditional team color of orange which he did run though at Indy last year…..