In 2005 when I was a partner in the Reno-Fernley Raceway, one of the race cars that we acquired was a 1981 Ford Mustang that had been race prepared to run in SCCA road racing and Solo/Autocross events. The car had been a class champion in the Norpac region whose previous owner ran many events and was was from up in Oregon. We used the car quite a bit as a teaching car as it is a very well balanced machine and with a “built” 4 banger and a T-5 transmission Griggs racing suspension, Koni coilovers all around,Aerospace Component brakes and some other custom stuff etc, it runs well but is not super super fast and almost bullet proof. The classic story about the Mustang was that when I brought it home to do some work on it and additional prep for couple of races, my boys started to call it “THE FLYING TURD” because it was painted it it original Dark Brown with a bit of Red hue that was pretty popular on many cars back in the late ’70’s and early ’80’s including a number of Porsches and even Steve McQueen had back in the mid ’60’s painted one of his Ferraris that color! (OUCH!). So as we continued to run it at the track in some events, the name kind of stuck……..and continued affectionately to be called “THE FLYING TURD”.

I still have the car today, however we painted it back in 2009 in a tribute livery of bright yellow and black like the early Terlingua Racing Team cars from Carroll Shelby with driver Jerry Titus and ran with even #17 for awhile. It can be seen in some of our earlier posts in those colors. The car has not been raced either in some Road Races or Solo/Autocrosses in about 6 years however, we are hoping to bring it back out here locally for some SCCA events here locally run at Stead Air Base where the Reno Air Races are held and also some Vintage Race events across the hill in California this race season.

Another very funny anecdote that I read recently was in John Morton’s book “Inside Shelby American”. John raced the first big block 427 Cobra that Ken Miles had put together as a “What If” and both of them ran that first cobbled together monster at Sebring in 1964. Both those guys and most of the Shelby Crew called that first Cobra 427, “THE TURD” because it was so front heavy and handled like crap and looked like you know what…….So I guess our “TURD” was in good company.

Our recent Youtube post/video of a run and test at Stead Airbase SCCA Autocross in it’s “new” Terlingua Yellow after in hibernation for a long time.

“The Flying Turd” on track at RFR 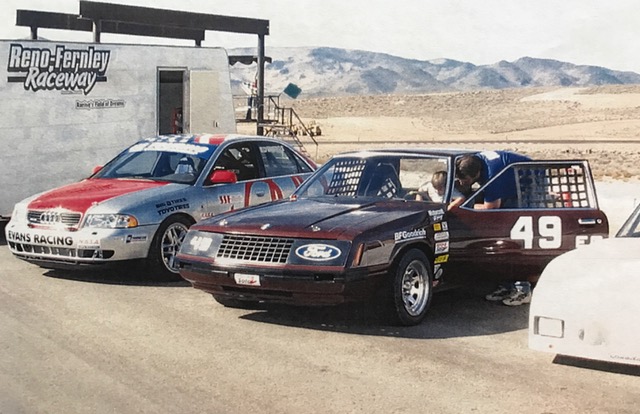 Our “Turd” along with a couple of our other track cars as I put my nephew in the drivers seat. 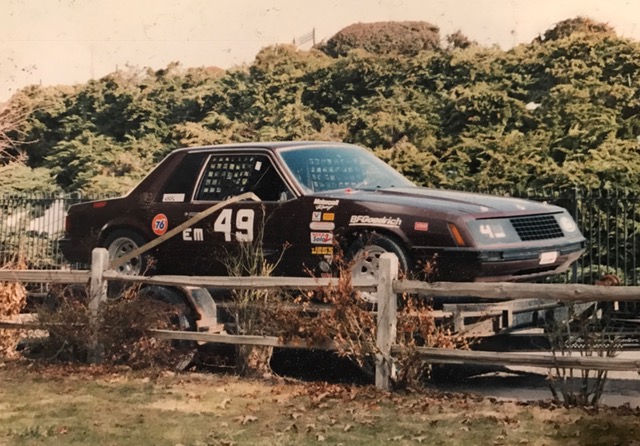 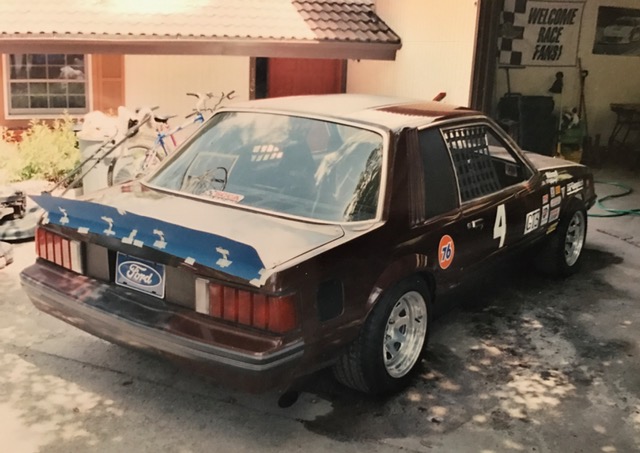 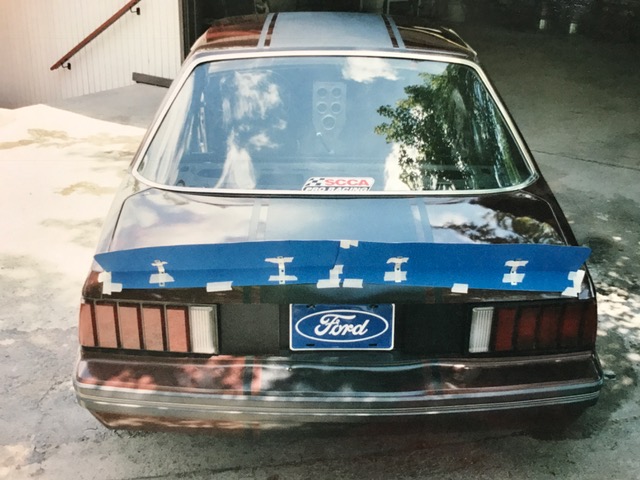 1981 Mustang GT3 “TURD” in driveway with mocked up spoiler getting ready to be prepped. 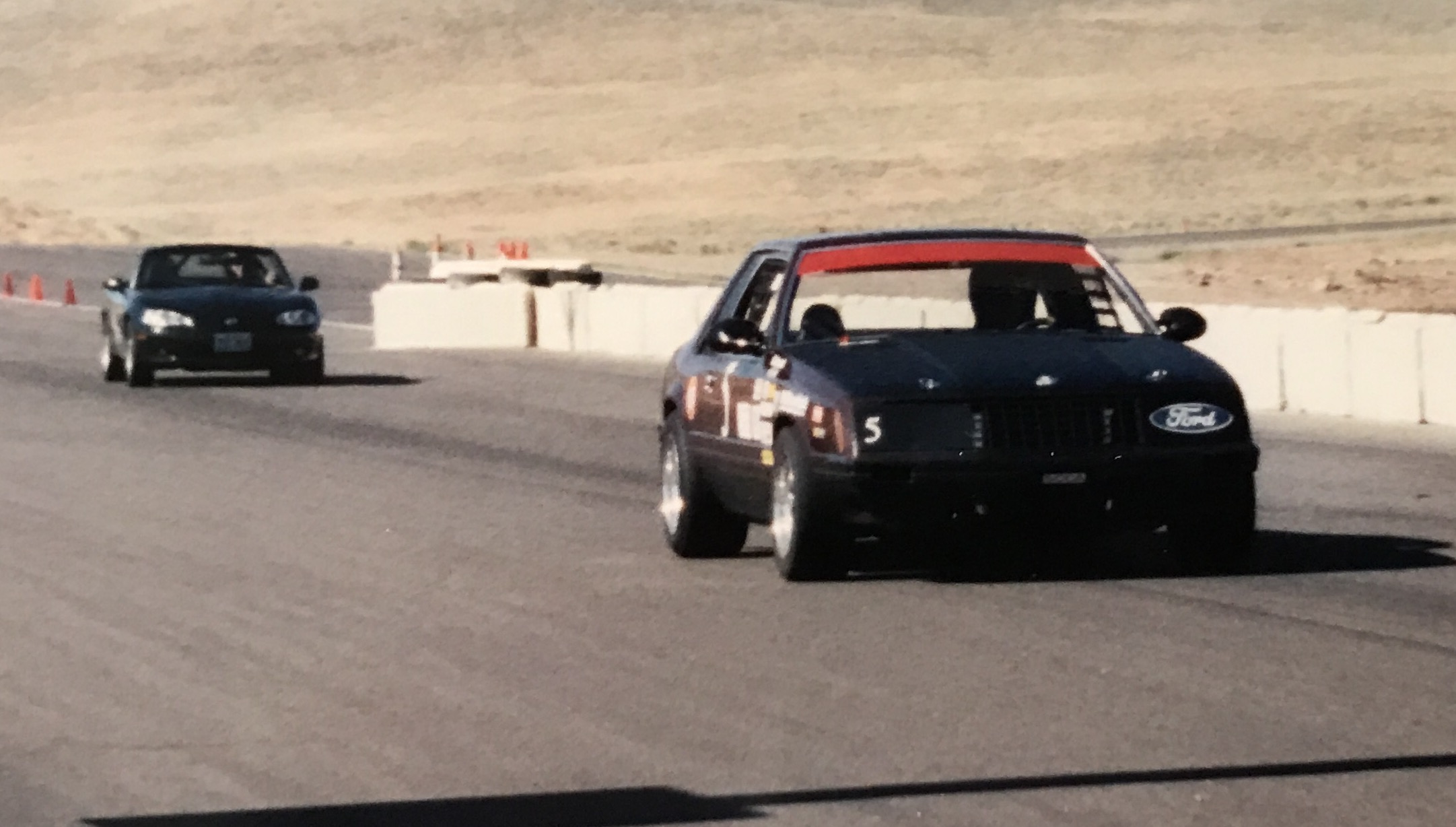 Calling in “THE FLYING TURD” to the pits. 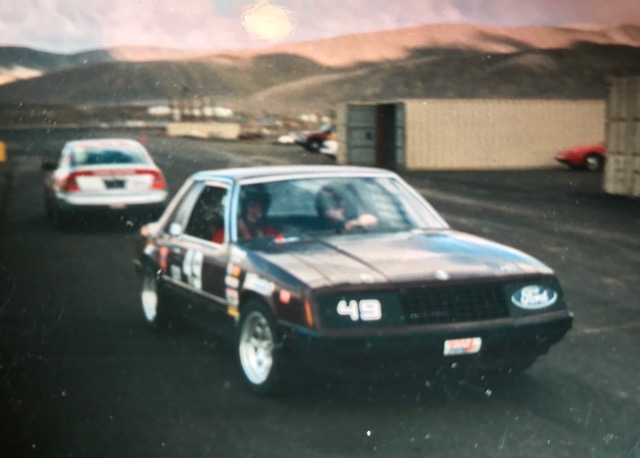 Used as a teaching/school race car. 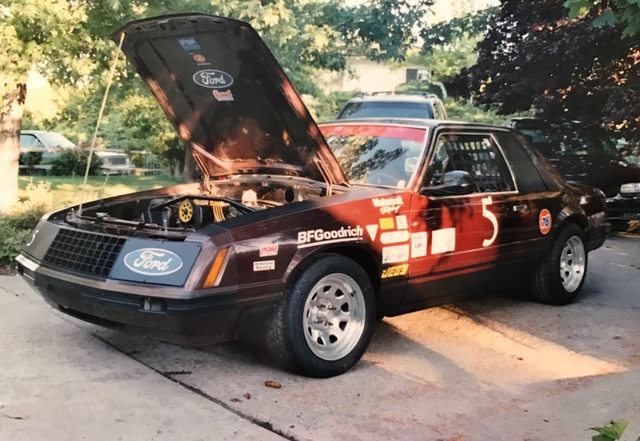 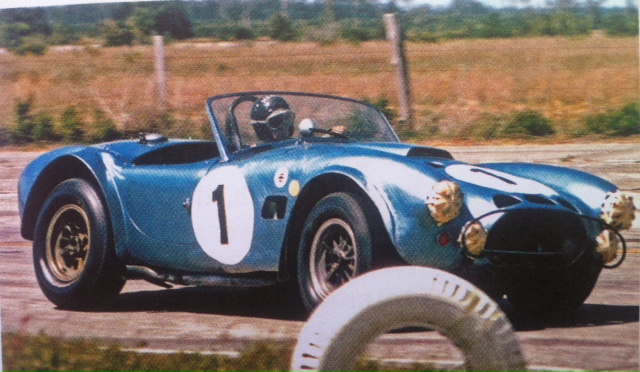 The Ken Miles/John Morton “TURD” original 427 Cobra at 1964 Sebring. A day before this picture Miles hit about the only tree possible on course and the whole right front side was rebuilt over night and fender and nose straightened with minimal hand tools. Front end was sprayed with spay cans, and it looks pretty decent. That is also another connection with our “Flying Turd” for our next story……. (John Morton picture….thanks) 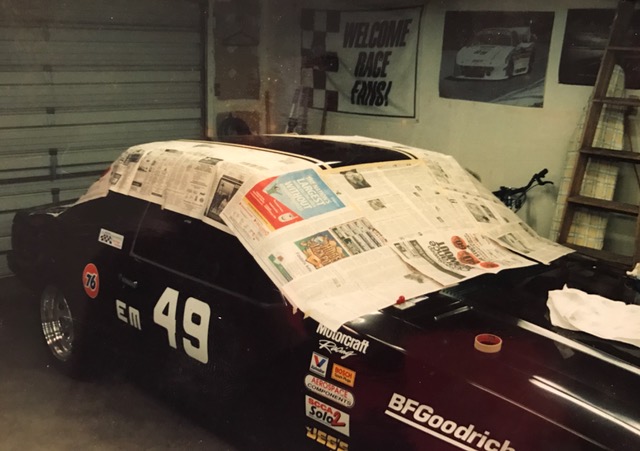 First over the top “Shelby Stripe” work with spay cans also in still the brown/turd colors with semi-gloss black.. 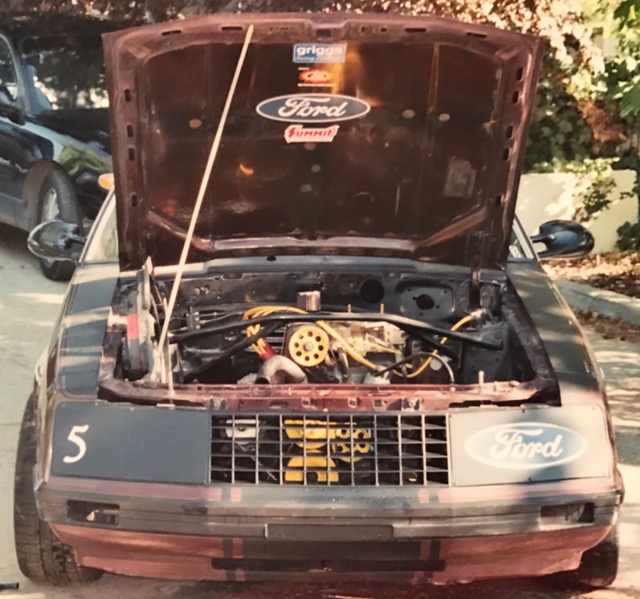 The “Flying Turd’s” Built 4 Banger with cleaned up Offy Manifold, big Holley carb, Schnieder Race Cam and some other special tweeks. Man that Brown Was Ugly…

Wishful thinking with old Cobra decal over the hood ornament that is cracked and beat up. Although Ford did have a Mustang Cobra in 1981, but not like our “notchback”…. 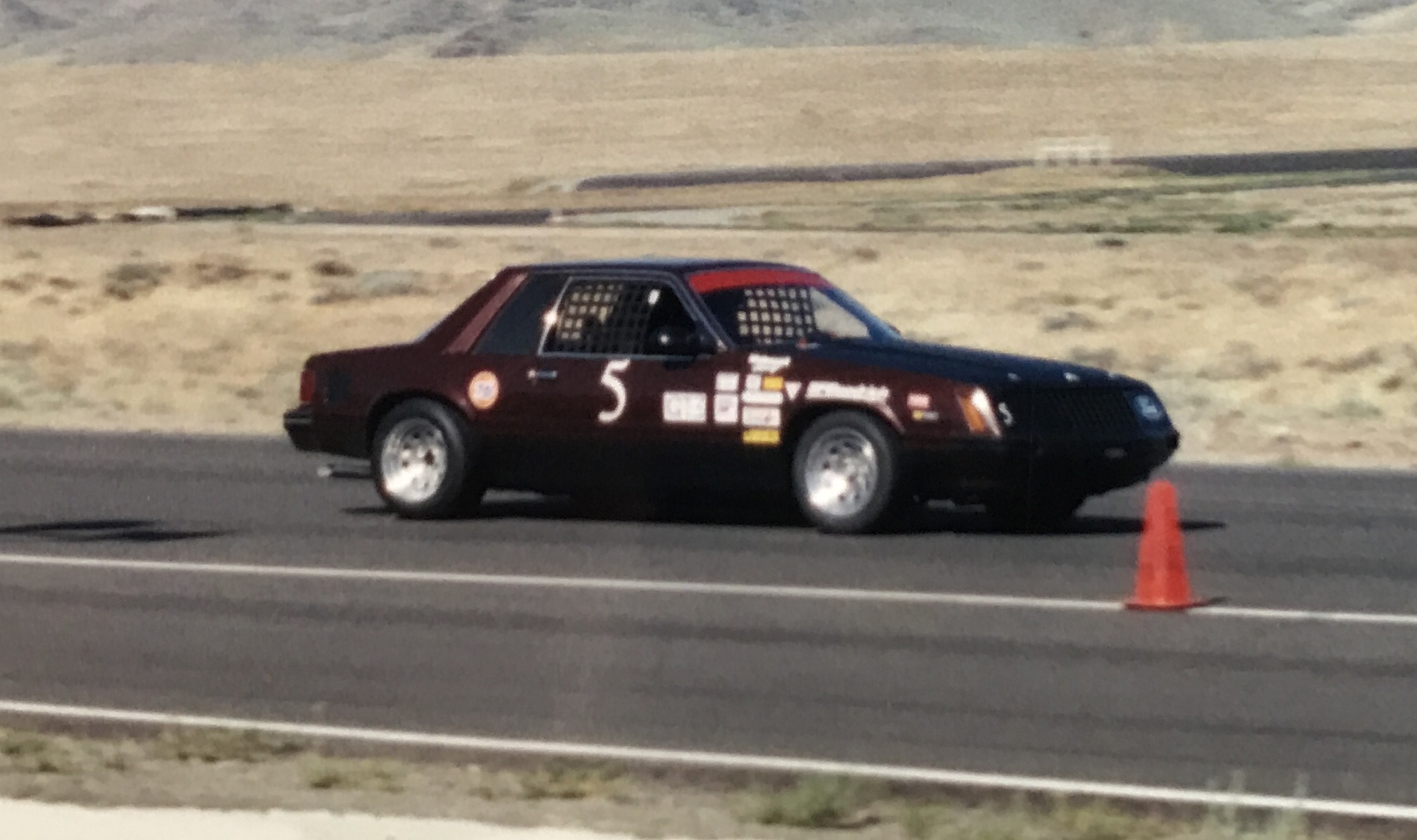 We are currently prepping the “New” Yellow Turd for some local SCCA Autocross events and I like this picture of around the cones for “NO CONES”….. 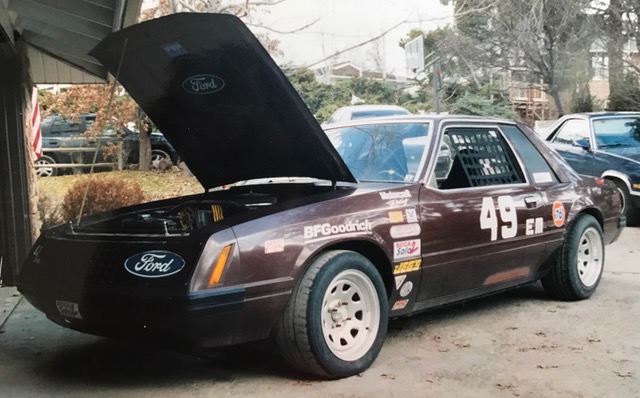 Another “Turd” shot just bringing it home and starting some cleanup and prep work….

The “Turd Abides”..! in the street after some cleanup/prep and change of number getting ready to head back out to Reno-Fernley Raceway a few years back to run in a few SCCA and HMSA Vintage Events….. 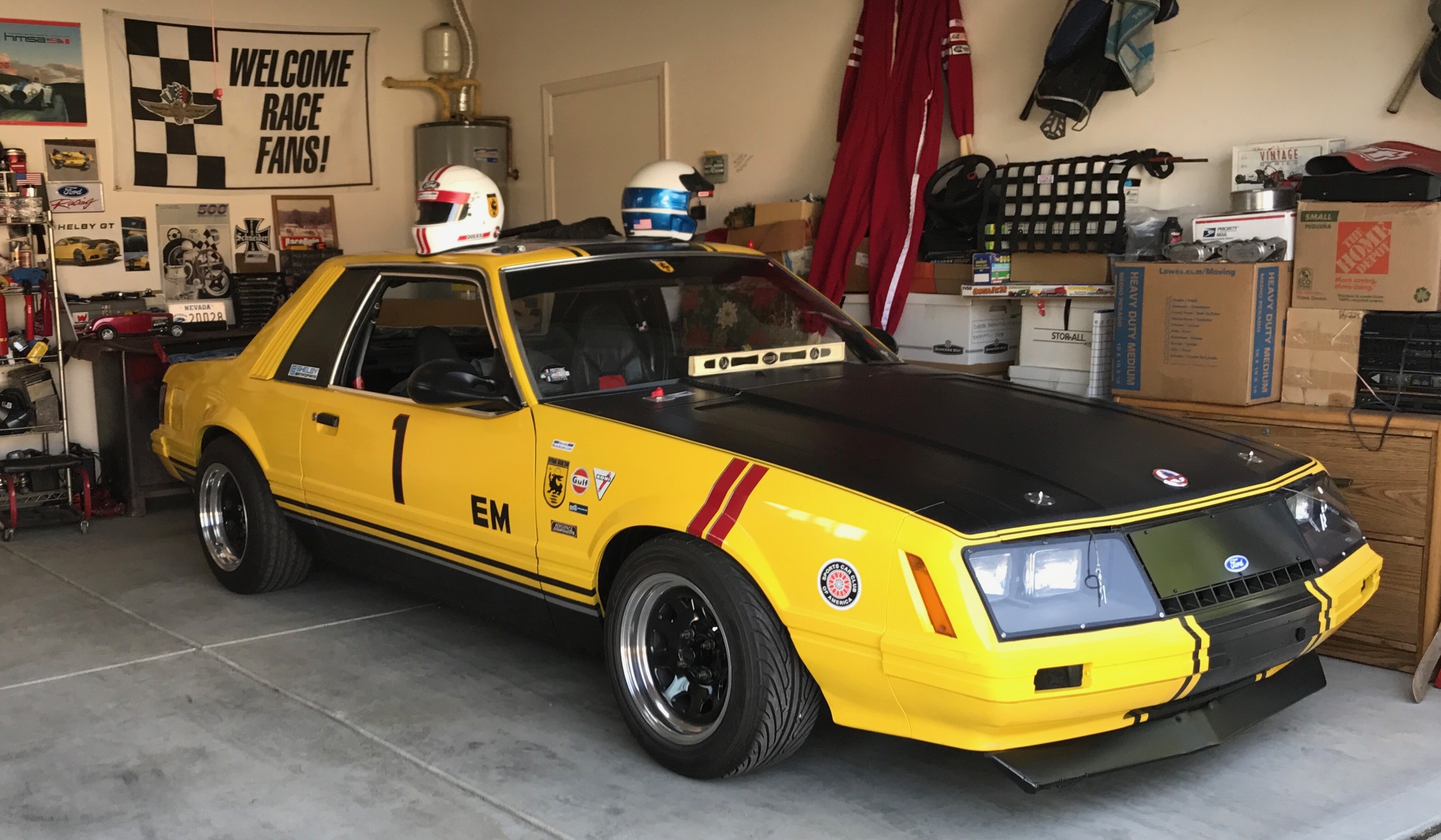 “THE TURD” as it sits in the garage in it’s Terlingua Tribute Colors awaiting it’s run out to Stead Air Base for last Autocross SCCA for the ’18 Season. 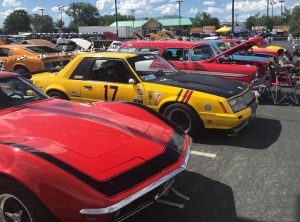