In the early 1980’s, the “We Build Excitement” division of GM which was Pontiac, finally built a 2 seat sports car that had been envisioned all the way back to the early 1960’s when John Delorean was the chief engineer and looking at the start of the iconic GTO for 1964. The car that was finally built was the PONTIAC FIERO that was released in the fall of 1983 as a ’84 model and was a mid-engined sports car with a similar concept as the Fiat X-19 and/or a baby Ferrari. Mr Delorean had always wanted to build a competing Pontiac to rival the Corvette and had built a 2 seat prototype called the “Banshee” in 1965, but the GM heads did not want to split market share. When the eighties version was finally approved, it was sold to the “bean counters” as a commuter/sports car with solid fuel mileage numbers and a four cylinder engine to test the market.

The FIERO built a niche market and was built through the late eighties, starting with the ’84 SE version up to a GT with swoopier IMSA style body lines and a bigger V-6, mid mounted engine.

In June of 1983, when I lived and worked in San Diego and just out of college, I was excited about this new Pontiac “baby Ferrari” and ordered one from Cunningham Pontiac in the East County. It was on order for a bit over 6 months, but then in early December 1983, I picked up a bright red Fiero S/E with just about every option available at the time. I have the sticker window invoice somewhere in my files, and it was priced around $12,000 out the door. This car was the first Fiero delivered for sale in the San Diego County region back then.

I really enjoyed that very early Fiero and was quite fun for few months having a car that not too many people had seen before. I know the early cars get a bad rap with some problems, but I had very little items go wrong with mine. Replaced a couple of throttle position sensors on the new then, throttle bodies, and that was it.

Pontiac Fieros continued into racing with IMSA GTU, the were built by Huffaker Racing by Joe and his dads team, and even paced the Indy 500 in 1984. I think a lot of them were beat up pretty good through the years following, but I was watching Mecheum Auctions the other night, and like other eighties machines, you are starting to see some of them restored and brought out into the collector market. I had that 1984 SE for four years and after I got married and started our family needed something bigger and it got traded in on a Ford Aerostar van……on well, that was the era. 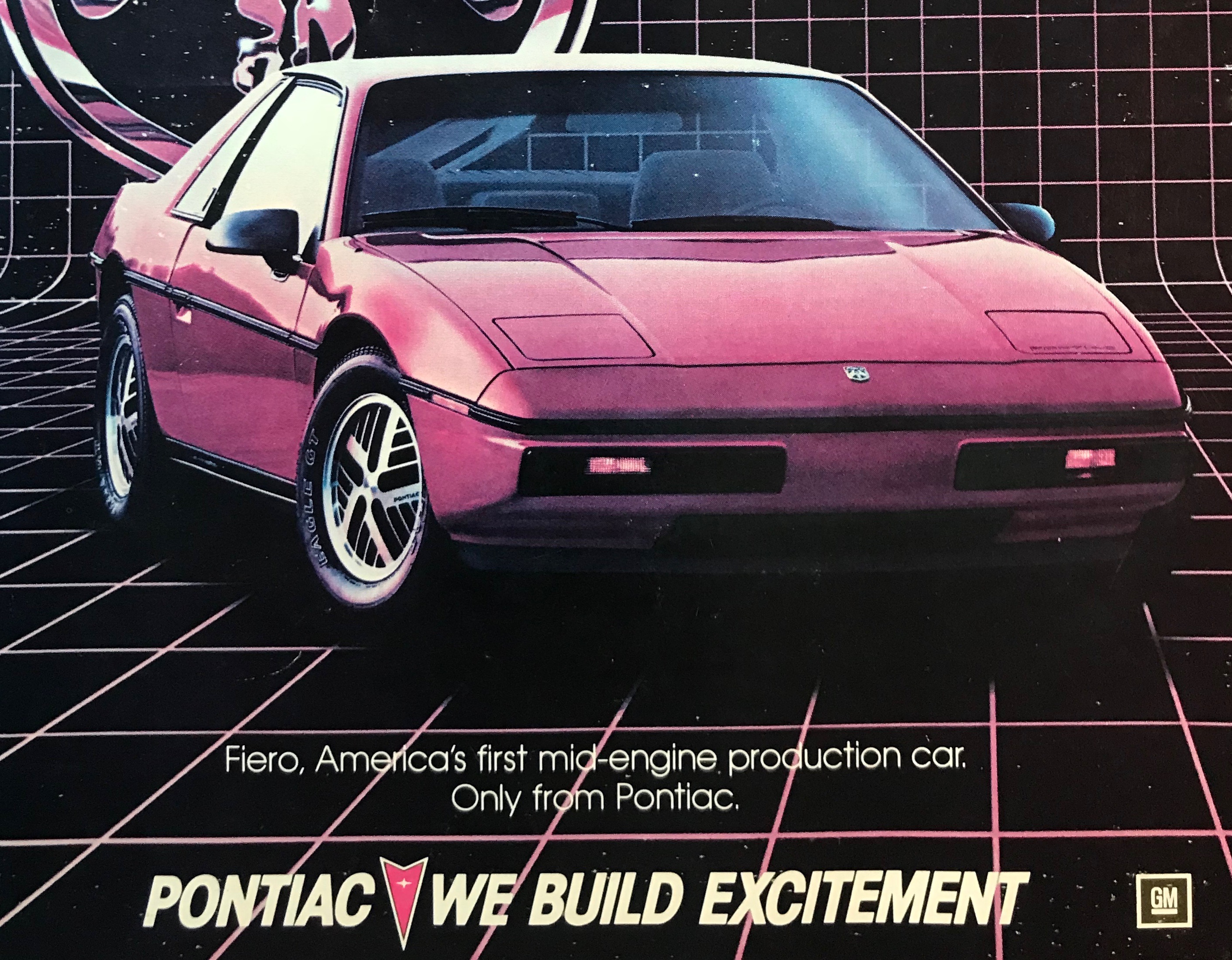 An early ad from Autoweek, I think, with a red S/E like that first FIERO I had in San Diego.

1985 Pace Car version of the S/E notch-back style with bigger wing and airbox inlet to mid-engine.

The FIERO at speed. 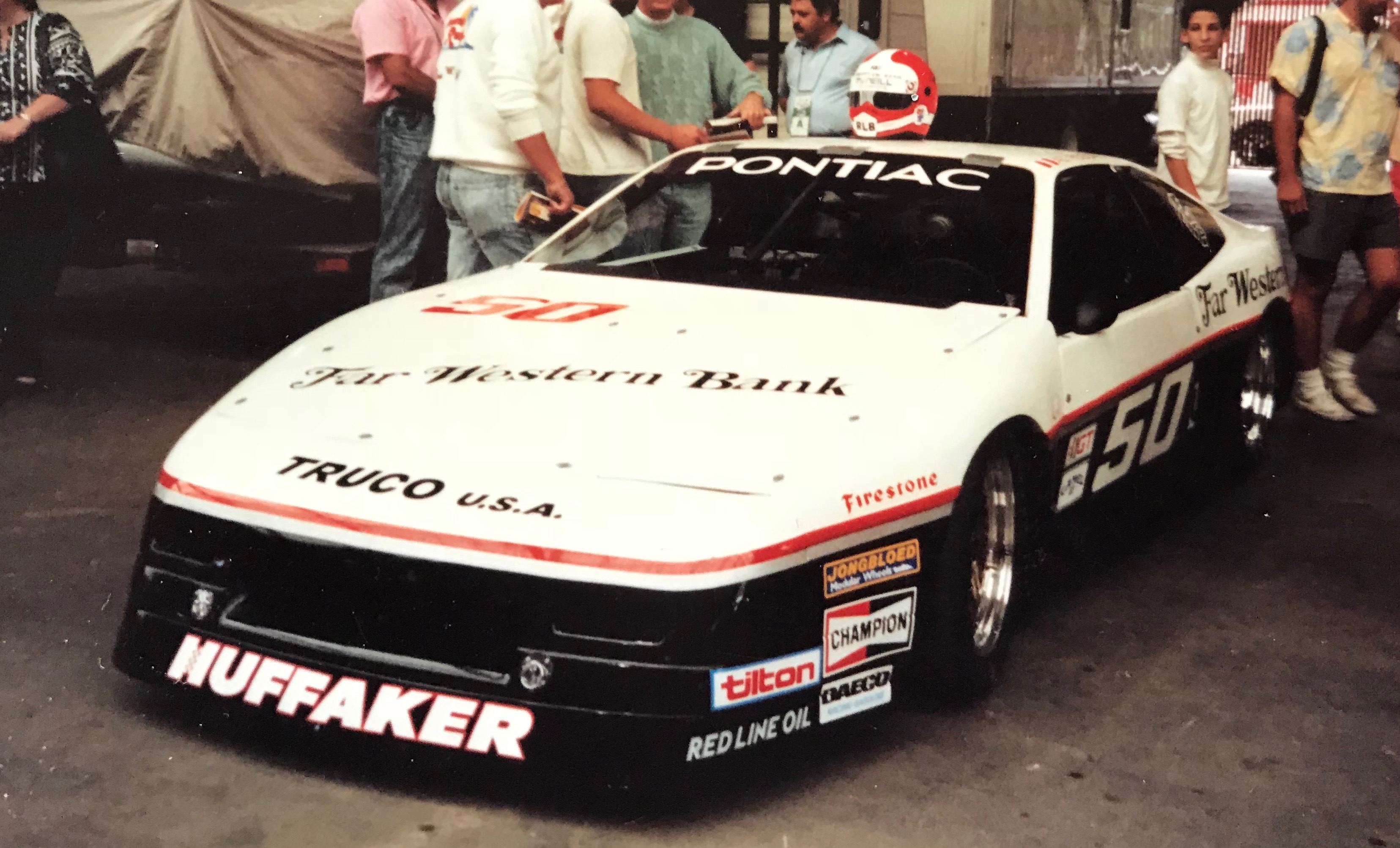 The IMSA GTU Fiero, as built and raced by Huffaker Engineering. This was at Del Mar in 1985 for the race with IMSA. We were there for the day before vintage race with our good friend Ted Roberts and running the Javelin. A few years back, through another friend, I inquired to Joe Huffaker Jr., about if they still had any of these cars around, Joe did not remember where they went, thinking that they had been sold off to some Mexican businessman/racing enthusiast some years back. 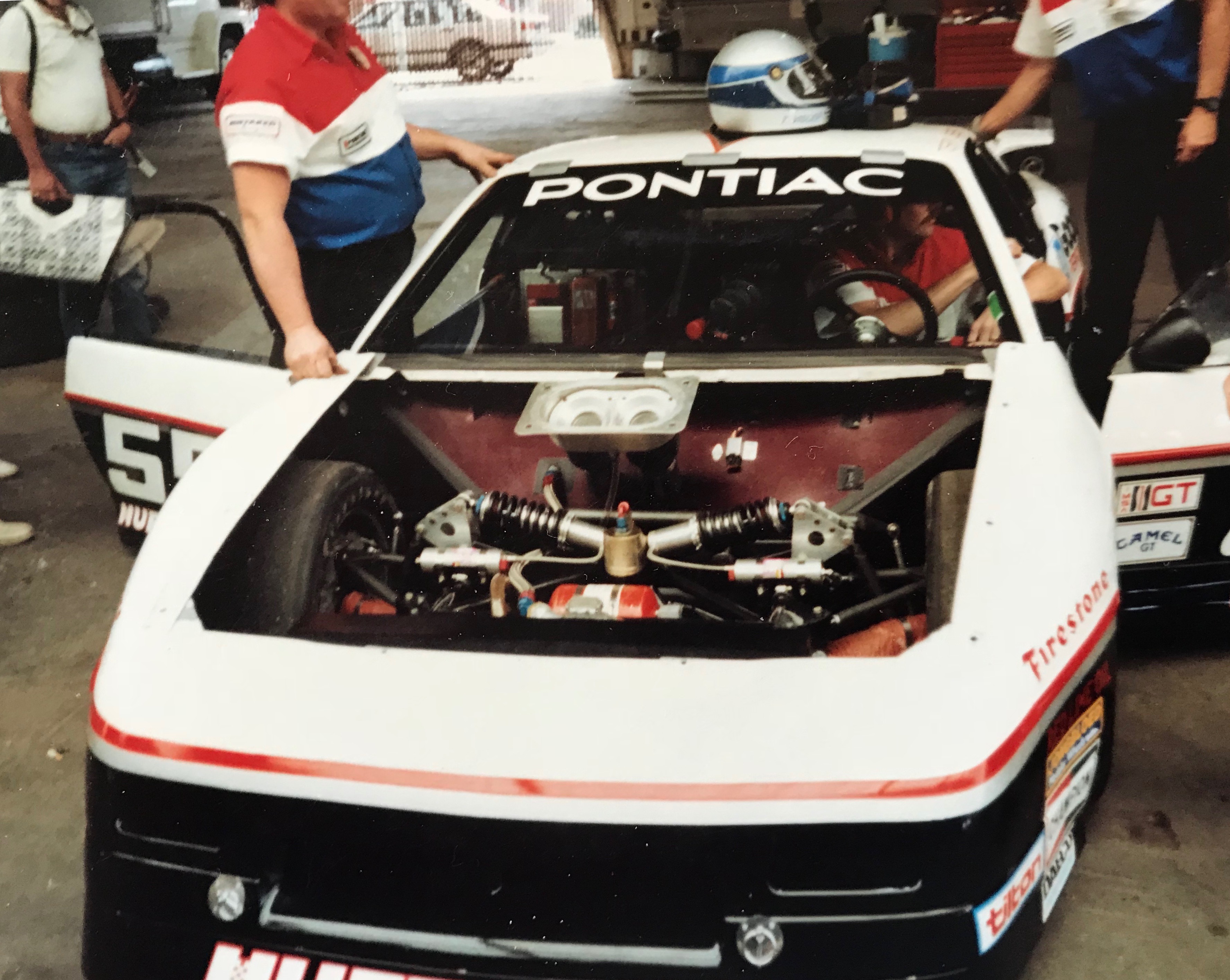 In this shot you can see the tube frame and transverse coil-over suspension designed by the Huffaker Team. Certainly not the stock set up of the S/E or even the Pace Car Edition.

Bob Earl in the Goodwrench sponsored GTU FIERO at speed in 1985 at Miami GP.

STP stepped on board for awhile during IMSA Season 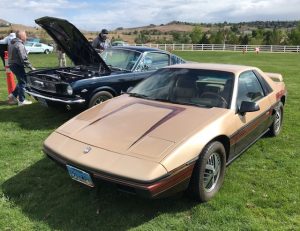 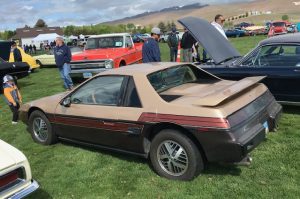 Starting to see a few Fieros at shows now,,,A small cult type following seems to be forming with them.Here is an 1985 SE with the factory rear wing and some “custom” paint of some type…

One thought on “EXCITEMENT FROM THE EIGHTIES: Pontiac builds the Fiero”