In 1965-1966 Dave Puhl of Puhl’s House of Kustoms created a “driveable” New Trend in Muscle Cars for the then ever popular show car circuit to showcase ideas such as things we currently see at SEMA these days. The “ILLUSION” was built as an asymmetrical design and constructed similar to the front engined Indy Cars of the day with a tubular space frame and hand formed sheet metal for the way out body contours. I was just in late grade school at the time but got to hang around the shop as my Dad was partners with Dave and was his shop foreman and painter for many of the customs that were turned out by House of Kustoms for a few years. I also helped with building the “concept wooden model” of the Illusion that was shown in some of the magazines back in the day prior to the real Illusion’s first public showing at 1966 Winter Autorama in Los Angeles and at the Oakland Roadster Show.

The car was a “bottom breather” with intake scoop and radiator beneath the front end. Suspension was from a Morris Minor for the front with Torsion Bar adjusters with a Corvette rear end for fully independent set-up. Brakes were also from a Chevrolet Corvette. Muscle power was provided by a then fairly new Hi-Po FORD 289 with Dual Quad Carbs. The Brushed Aluminium divider was off set to the right side to follow the “asymmetrical” design theme instead of being a painted stripe,which was pretty common on Race and Customs of the time. The paint was a beautiful mixture of candy copper and orange over a gold base. It won many awards and if I remember correctly was in a movie or two with bit parts.

With the “trend” of bringing back older “Show Cars” and restoring, Pop and I had always thought it would be great to find it and bring the ILLUSION back to life. The car seemed to be lost for a long time like many of the old customs and race cars. However just recently in a new  book I saw on Custom Cars it appears the Mid-Western Customizer and Show Promoter Karl Casper had found and acquired the “ILLUSION” and was set to restore it in the near future. We will look forward to maybe seeing it again some time soon on display at some museum or even at the Grand National Roadster Show. 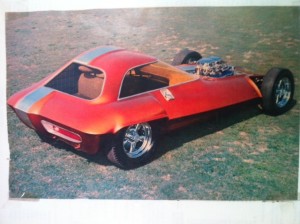 ILLUSION as photographed for the ISCA Yearbook 1966/67

SEBRING 1969-1972: Our new You-Tube Vid of recently Found Pics from the 12 Hour Classic Event 1980’s MUSCLE CARS: Is it now in vogue to bring out these Eighties classics?

One thought on “ILLUSION 1966: Asymmetrical Muscle 55Yrs Ago at Oakland Roadster Show”